The article provides a substantive philosophical, philological and translation­al analysis of each paragraph of the Preface to Immanuel Kant’s Critique of Pure Reason. It is revealed the conceptual character of the Preface’s formulations, which shows the logic of the movement of Kant’s thought in philosophy. In particular, the complexity of the problems of Kant’s philosophical research and the unity of his phil­osophical position, which can be traced in various works of Kant, are visualized. In this light, the Preface acts both as a certain summary and as a general direction for Kant’s subsequent philosophical developments. Pitfalls of possible misunderstand­ing and, accordingly, inadequate translation of individual provisions set forth in the Preface have been identified. The translation of the Preface must take into account Kant’s respect for metaphysics, which the German thinker seeks not so much to sur­pass as to improve. Kant’s metaphysics appears not as a frozen doctrine, but as a path of reason, his creative search for answers to the last/first questions of philoso­phy. This search for reason has been ongoing throughout the history of philosophy and will obviously not be completed by the philosophy of Kant, as he himself was well aware. Criticism of skepticism appears in this light not as a denial of metaphysics as such, but as an identification of weaknesses in one or another historical version of metaphysics. In addition, the study of metaphysics is a matter of discourse – a com­petition of judgments of different thinkers. Metaphysics concerns not only and not so much the reason of a person, but the person himself as the bearer of the reason. At the same time, Kant emphasizes the self-sufficiency of the reason (with all the men­tioned multiple ways of it) as a means of achieving the completeness of metaphysics. This article is an accompaniment to the new Ukrainian translation of the Preface, which is presented below in the same issue of “Philosophy of Education”. The author previously presented these theses for public discussion, but here they received their first academic edition.

Candidate of Philosophical Sciences, educational analyst-consultant, editor of the website of the Kantian Society in Ukraine

Kant I. (2004). Critique of Practical Reason / trans. from German, approx. and afterword by I. Burkovskyi. [In Ukrainian]. Kyiv: Universe.

Kant I. (2005). Prolegomena to Any Future Metaphysics: That Will Be Able to Come Forward as Science / trans. from German, introductory article, comments and notes by V. Terletskyi. [In Ukrainian]. Kyiv: PPS-2002. 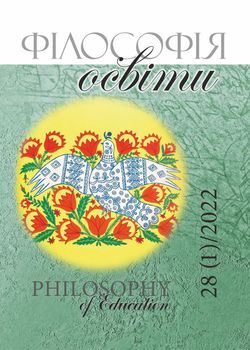