Explore the major ideological patterns of development of a socially philosophies of education in the context of the problems of institutionalization of knowledge about human and social development. To analyse system-integration aspect of social philosophy and education management in interaction with model of «new humanism» in formation of socially valuable orientations. Classification existing in the western philosophy of education and education of directions is spent, proceeding from basic principles of philosophical school or a current, first of all considering those the purpose and means which are really involved by them in process of education, social development and socially-moral education and being based on the basic installations, the purpose expressed by that or other direction, how its supporters imagine the person, its requirement, a social role, behaviour which the education system and education urged to form.

Considering growing requirement of a practical embodiment of ideas of freedom, justice, aspiration to realisation of the human rights proclaimed a society, supporters of the concept of «new humanism» see the main objective in blocking a way to conformism, to a manipulation behaviour of the person and to create conditions for its free self-expression, for realisation by the person of a fundamental choice of acts in a concrete situation and by that to warn danger of formation of the unified form of behaviour. In it principles of «new humanism» approach with a position of  instrumentalism and neopragmatism.

Before social philosophy of education/upbringing  it is necessary to define a problem factors which cause achievement of its main objective, to state an estimation to moral principles and personal qualities with which actually the education/education theory connects realisation of the problems, to show, why these, instead of any any other principles and qualities open to the person possibility to choose in a concrete situation socially powerful both morally defensible and comprehensible line of conduct in public the relation. Statement of a question on necessity of the philosophical analysis of problems of education and education in a social context serves as an indicator of understanding philosophers, teachers of an increasing role of the human and moral factor in society development. And, at last, the aspiration to develop socially-philosophical bases of pedagogics in general and education in particular, testifies that the western and domestic philosophers, teachers, representatives of social and psychological sciences, at least, the majority of them, have realised the public importance of an education system and education, its global character.

Viktor Viktorovych Zinchenko, Institute of Higher Education of the National Academy of Pedagogical Sciences of Ukraine.

Doctor of philosophical sciences, professor, principal researcher of the Institute of Higher Education of the National Academy of Pedagogical Sciences of Ukraine. 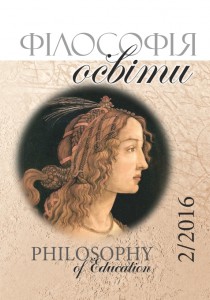