The phenomenon of sexuality is the cornerstone of being of a person, which by nature manifests itself socially. At the same time, currently sexuality is a stumbling block and a Sisyphean stone to "push" throughout human existence. The afore-mentioned place and role of sexuality in human being are directly related to the peculiarities of the outlook of a civilized man and modern culture in general. In other words, the peculiarity of the worldview and the arrangement of the cultural space of a civilized man is largely a cause of transformation of sexuality, as an attribute of human existence, into a dominant source of internal stress, mental disorders, various deviations, and ontological confusion and alienation in general.

As a result, an impartial understanding of nature of the phenomenon of sexuality and its functional essence in human existence definitely facilitates its emancipation, especially in the context of upbringing of the younger generation. An appeal to critical thinking contributes for critical elimination of the bias, which, among other aspects, establishes a fact that the cognitive abilities of a person are limited. The latter means that everything what is widely recognized is, in fact, only a generally accepted paradigm, including the alleged scientifically substantiated interpretation of the manifestations of sexuality associated with the sexual sphere of norms and rules, as well as basic ideological settings, and by no means a combination of truths. An integral and adequate representation of the phenomenon of sexuality can be formed on the basis of the analysis of relevant informational achievements in the field of science and philosophy, philosophical art, esoteric experience, etc.

Therefore, firstly, the article is aimed at comprehension of key stereotypes and dogmas, which are widespread in both public and scientific or expert opinions. Secondly, the article thoroughly discloses a number of features and attributes of the phenomenon of sexuality, taking into account the experience acquired through the mediation of the world mythology and esoteric experience in the form of the so-called philosophical art. Thirdly, the situational analysis of a person is contextualized through one’s sexual nature. Consequently, the article focuses on issues of sexual education and ‘enlightenment’ of a person depending on a variety of age and social positions, as well as the community as a whole.

The introduction of the relevant research activity of the author of the article has been instigated by the obvious lack of scientific substantive studies on the nature of the phenomenon of sexuality and its functional aspect on the territory of Ukraine. At the same time, the Ukrainian community needs significant educational influence on issues of self-realization of citizens, in particular in the sexual and private spheres.

Doctor of Sciences (Doctor of Philosophy), Professor of Department of International Relations and Social Sciences

Kaluha V. (2014) Identity and identity in the social life of man: from conflict to unity. Nizhyn: Publisher PB Lysenko M.M. [in Ukrainian].

Heidegger M. (1998) Prolegomena to the history of the concept of time. Translated from German by V.V. Bibikhin. Tomsk: Vodoley [in Russian]. 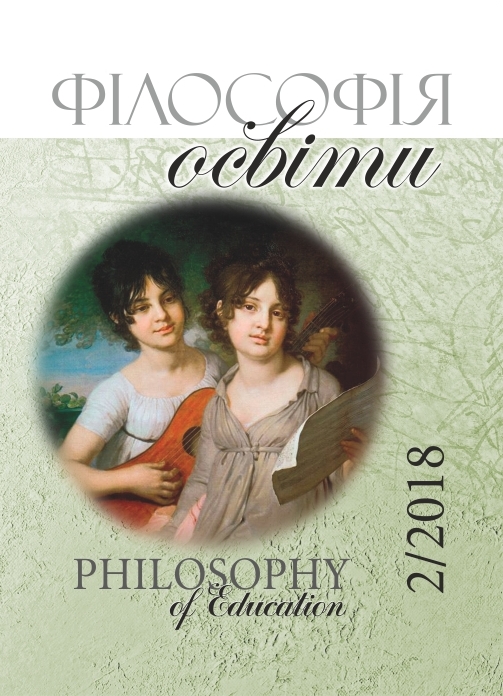