The considerable change and release from the dogmatically-doctrinal content of the soviet «Marxism» has to be done in a course of Philosophy in the Higher School of Ukraine (so as in other post-soviet countries). It is said, in particular, about the elimination of the most odious pseudo-Marxists myths, e.g. so-called «basic question of philosophy» developed by Hegel in 1882, those ones connected with the Lenin’s «innovations» (party philosophy, «progress» of materialism and «reactionary character» of idealism, about two «cultures» –bourgeois and proletarian – in the culture of every nations and etc.). The similar myth (according to the latest Engels) is «doctrine» about «the dialectics of nature» («objective dialectics»), developed after the «model» of Hegel’s interpretation of the objective reality. Nevertheless, the relevant Hegel’s idea (taking into consideration his philosophical position) was completely logical and consecutive, whereas objective reality by Hegel is spiritual by its sense. According to Engels, «connection» of spiritual phenomenon of dialectics (as far as dialectics
has always been a cognition method, but not a natural rule during the whole history of philosophy) with the objective reality of nature is a philosophical « centaur». 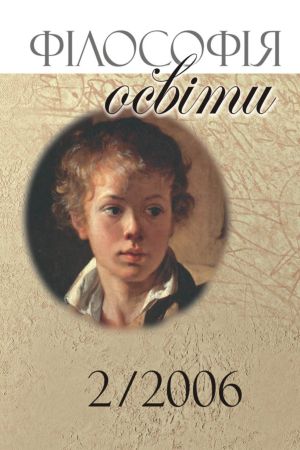 Buchko, I. (2006). Directions of Philosophical Courses’ Renewal in a Higher School of the Modern Ukraine. Filosofiya Osvity. Philosophy of Education, 4(2). Retrieved from https://philosopheducation.com/index.php/philed/article/view/191
Download Citation